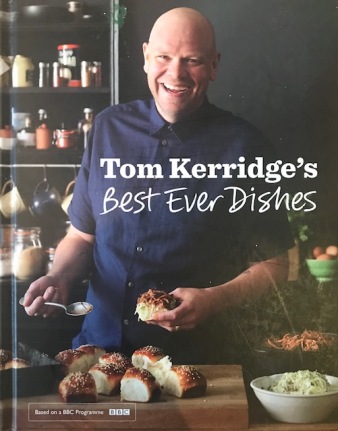 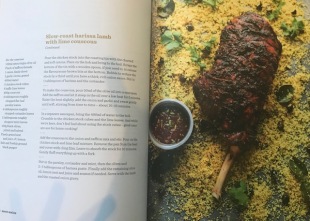 Not a what you can find in the back of the cupboard/fridge type of cook book, unless you have a very well stocked larder! Because of that I am more likely to reach for this book on an occasion when I want to make something special and don’t mind a proper trip to the shop and for that it does the job brilliantly. Proper dig in food that you can enjoy with your friends and family and as long as you look at the ingredients list and pick sensibly the recipes mean no one will even notice that you might have omitted certain things.

Tom, until his most recent TV series at least, definitely isn’t one you would pair with healthy eating. There is a soups and salad section but to be honest it’s certainly in my opinion not the most exciting bit so while every now and again the remaining full fat, sugar, butter recipes are delicious with health in mind a source to be used in moderation…saying that, if you’re trying to gain some extra weight then you might do well to look here for some interesting and delicious inspiration.

Each recipe within the book is accompanied by the appealing image of the end product, I love this and books that don’t have it frustrate me somewhat. The mains recipes also incorporate sides to ensure it is a full meal within one method which is handy and means you don’t have to flick between recipes or worry about appropriate pairings. Having said this the instructions aren’t as easy as maybe they could be, it definitely serves to have a read of the full method before you kick off any cooking as otherwise I fear due to requests for multitasking at various points and sometimes requests for stocks etc which point you in the direction of another recipe entirely you might not end up with the whole meal being ready in one go!

*All methods will need to be modified with extra prep steps to wash products etc before use unless otherwise stated.

With family visiting for a Sunday lunch but not wanting to do anything too formal I decided to give Tom’s Pulled Beef Brisket in a bun a go.

The brisket is served in home made milk buns, with coleslaw and a sticky sweet BBQ sauce. I added a heritage tomato salad and some roasted new potatoes just to lighten it up a little but you could definitely do without.

The recipe meant a serious stock up for my possibly somewhat meagre London kitchen selection and I imagine it was necessary that I didn’t attempt a corner shop top up with the ingredients specifying ‘cabernet sauvignon vinegar’ over your normal red wine vinegar and coriander seeds (maybe it’s just me but I definitely don’t stock these…) – I’m not sure if either made any difference but thought for this effort at least I would attempt to stick to the recipe.

Having said that the cost of the additional extras I had to buy was thankfully equalled out by the lesser cost of the brisket, I managed to pick up a piece from the butcher that fed 10 easily with left overs for £20…a whole lot less than I expected.
So, the beef does take a little bit of prior preparation in terms of the creation of a spice rub the night before and the reality of doing this, then re wrapping would I imagine be pretty daunting if you aren’t a massive fan of handing meat but once done, and it could be done further in advance, the brisket sat happily in my fridge ready for slow cooking the next day.

One issue I had was the timings…we wanted to eat at lunchtime circa. 1.30/2pm which meant that with resting time included and the 6 hours cooking time taken into consideration I was up 6 to get it into the oven….although it was as simple as putting it on a roasting tray with some stock in the bottom of it at 6am even this seemed a little much!

In addition, the recipe suggests making the BBQ sauce as the meat rests but I made it the night before as it seemed one too many things to juggle! I’m glad I did as if I’m honest the sauce as per the recipe simply didn’t work…it was super super vinegary and would have been inedible, it also seemed incredibly thin considering it was meant to coat the meat and be sticky and sumptuous. It served as a base and with added cola, sugar and some corn flour to thicken I managed to rescue but because of this add until right approach I ended up with far more sauce than I needed.

While the sauce hadn’t been something I was worried about at all the milk buns were. I hadn’t done much bread making and to make matters worse my scales decided to go through a short period of temperamentality just as I was weighing out the vital ingredients but thankfully they, and due in no part to any baking skill, turned out brilliantly.

Over all I loved this meal. It was more relaxed than a Sunday roast but all served up still looked like a real treat, the meat was melt in the mouth and really tasty. It’s not one for eating with people you aren’t comfortable around as while the idea of neatly pilling the buns with various elements might seem appealing from the evidence around our table it was somewhat impossible and definitely not tidy!

What do you fancy?

Please note any views expressed on NowWhatCanIEat pages and social handles are my own. I am not a trained dietician and request not to be considered as such. Should any medical query’s arise from anything discussed in my post please seek the appropriate clinical advice.

In addition, while all recipes are cooked following the guidance I have been given on what it is safe to eat when immune suppressed they have not been checked by a dietician. If the advice you have been given differs from anything here please follow the advice of your team.